Creating your own hanging bars

By which you travel

No need for a catch net

Across my bathroom ceiling

Yet, she is grounded to her perch

by the intemperate winds.

She is equally independent and imprisoned. 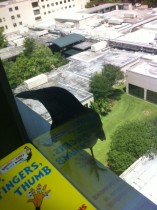 As a writer, I let few things go unnoticed. Things that have little or no significance in real life may spark a certain interest in my mind. So when we were paid a visit by a certain individual of avian nature, I was quite taken with him.

It’s not the first time we’ve had this particular visitor. He came once before, cawing and pecking at the ledge, presumably trying to snatch up tiny insects scurrying there. He wasn’t coy about trying to get our attention. He was rather photogenic, too.

Now, as some of you may know, traditionally having a crow caw at the window of one’s sick room is not something you’d want. But I grew up on Poe and Hitchcock and King and all things delightfully frightful. I’m not superstitious, as a rule, and I had to capture this beautiful ebony bird. My  only regret is that I didn’t have a better camera.

I suppose he saw his reflection in the window as he scuttled back and forth on the ledge, peering into our window and the window of the room next door. I wasn’t perturbed by his presence, but he seemed to look at me-right at me-and so I said to him, “Your services are not needed here.” To which he cocked his little head and with a look of apparent understanding in his coal-black eye said, “Caw!” then flew away.

It’s an inspiring, fresh sit outside and write kind of day. Nature’s colors are vibrant, and I’m reminded of some of my favorite poets- Frost, Blake, Wordsworth, Thomas, Tennyson.

The sky is bright, except for clusters of nomadic clouds moving in, momentarily obscuring the sun and providing some shade and relief from the heat. Tiny brown Warblers fly past as if I were a statue to them, hopping and dancing at my feet until the slightest movement by me alerts them of my presence.

I was trying to capture two birds playing in the grass but the sun was obscuring my camera screen. If you squint you’ll see them.

I sat on a bench beside this tortoise for an hour before a little girl pointed him out. Proof that as adults we forget to notice the small interesting gems that dress up the scenery. He’s mighty cute.

one who’s been on the Internet in the last bazillionty years has surely noticed that it revolves around the feline species. I’m certain there is a main cat headquarters out there from where the entire Internet is generated. Cats are smart. smarter than some people. And thanks to the ancient Egyptians, they have been evolved to expect the royal treatment.

Not everyone is a “cat person.” Many people dislike them – a lot. I think it’s because a person needs to have somewhat of a submissive nature in order to get cats. They certainly seem to view humans as a subspecies. We feed them, clean their poop, and we wait for just the right moment to give them affection. They let us know if they aren’t in “the mood”,  usually with a scratch, bite, or scratch/bite combo. Cats  have no regard for human beings, our wants, needs, desires, or sleeping patterns. It’s understandable how some folks may not go for that.

On the other hand, there are those of us who adore cats, and we don’t mind bowing to their air of superiority. We provide them with all possible amenities – treats, toys, catnip. They amuse us with their antics, then tell us to go eff off and hide for hours.

At any rate, those of us who love cats probably do so for one main reason – they are so stinking cute! And it’s for this reason I sincerely believe my blog needs more cats.

This is my cat, Stewie. He’s actually my former cat as he ran away from home just before Christmas. Hopefully someone took him in and is cuddling and loving him.

This is exactly what is looks like. A cat pencil sharpener. What were you thinking?

Orion, also one of my former cats. This picture was taken at the animal hospital where he was admitted at the same time I was in the hospital giving birth. He’d eaten a toxic plant. He recovered but then was hit by a car some time later.

I hope everyone has enjoyed the cat gallery. My blog feels complete somehow.