I wanted to make my first ever vlog, however, I couldn’t get my video to upload to YouTube or Dropbox-or anyplace! Soooo…. I went with Plan B, take still shots of the video and create a photo blog!

Last week, I was contacted by an acquaintance who was interested in shaving his head for September to raise awareness for Pediatric Cancer, and he wanted RB and me to be involved. We decided I’d do his shave (I’m not shaving my own head again until the next St. Baldrick’s Event, so I’m letting my hair grow back right now), and he chose Sunday September 1st, since it was the first day of Childhood Cancer Awareness month.

Our friend, Travis, was the shavee. Travis is a firefighter who decided to help raise awareness for childhood cancer. He’s also a graduate student at Nicholl’s State University studying marine and environmental biology. All of his research is in microbiology, and he hopes to get onto a pediatric oncology research team after graduation.

On Sunday, Travis came to our home so that I could video the shave so that we could share it. Unfortunately, like I’ve already written, the tech gods were not smiling down on me. Instead of being able to share the video, I can still share still shots of the video, though! 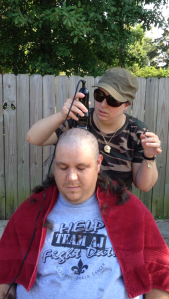 I’m an expert shaver, by the way. I’ve been shaving Robot Dad’s head for about 13 years now. And I shaved my own a few times after I initially shaved it last March, too.

Not only did Travis decide to shave his head for Childhood Cancer Awareness, he also spent Sunday chalking the back windshields of cars with messages to help spread the word about pediatric cancer. 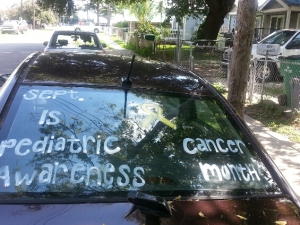 He even did Robot Boy’s van before he left so that we can spread the message whenever we’re on the road, too.

In my video, I thanked Travis and everyone who goes out of their way to spread awareness for pediatric cancer. Those of us in the pediatric cancer community try to make childhood cancer known to more people throughout the year, but especially during September because it is Childhood Cancer Awareness Month. We are thankful to everyone who shares the message, as well. 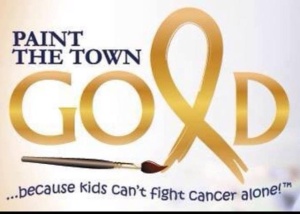 Now, while the likelihood that any baby would develop cancer by the trace amounts of chemicals in these products is low, no parent wants to, or should, expose his/her child to carcinogens. Many of us avoid smoking areas with our kids (I don’t even allow smokers to touch my baby unless their hands are washed post cigarette, and I don’t like my child to be exposed to the carcinogens left in their clothing…

I’ve written in many of my past posts that my son who is two years old has been sick for quite a while, suffering from seeming bronchitis related illnesses and even pneumonia. In January he became unable to walk properly and it led to the assumption by his pediatrician that he was experiencing inflammation in the inner ear due to an ear infection. Although she was concerned the cause was much more serious, she treated the ear and we all hoped for the best.

His condition declined over January and February, which found us not even a week ago in Children’s Hospital explaining to a myriad of doctors how he’d been ill since late last year and so forth. I’ve repeated the spiel so many times I’ve got it memorized. I don’t even have to think about it.

The pediatricians caring for my child at the hospital, like his regular pediatrician, were concerned about his dizziness and instability. They were concerned enough to conduct a series of simple neurological tests that raised their concerns further leading them to order a CT scan of his brain.

I knew the news was bad when two doctors came into the room, pulled up chairs, and said they were there to talk about the results of the CT scan. They advised us it had revealed a large mass in my son’s brain. I was frozen in this moment, trying to conceptualize the reality of this information. As I held my two year old son on my lap with tears teeming, he turned around, knelt on my thighs, put his hands on my face, and said, “Don’t sad, Mommy.” Trying not to upset him, I assured him Mommy wasn’t sad. Then he reached out to tickle my face in an attempt to make me smile. And though I was still crying, it worked.

An MRI was ordered for the next day, and it showed the doctors the actual size and location of the mass. From the MRI they also learned it had travelled down into his brain stem and his spine.

Oncologists informed us in their matter of fact way that the tumor is malignant. They also told us due to its delicate location, the surgeon will not be able to remove the entire tumor and my son will require follow up treatments of chemo and radiation.

I suppose it’s needless to say that since then we’ve been bombarded with information. I’ve spoken to twenty plus doctors working in nearly every field, it seems, from neurosurgery, orthopedics, oncology, endocrinology, speech therapy, and dietary needs.

They come in pairs, sometimes more. I spoke to three ENTs, two orthopedic doctors, and four neurosurgeons. And that’s not all.

Surgery is scheduled for next week. Suffice to say I am petrified. The procedure will be extensive, it will be dangerous, and it is critical that the tumor be removed as soon as possible. The neurosurgeons are only waiting until next week because my son’s lungs are still swimming in secretions from the pneumonia.

I’m proud of myself for remaining so positive up to this point. Optimism is a trait with which I’ve rarely been associated. But I am optimistic because I won’t be any other way. Because my child is still looking at me for reassurance. He doesn’t know everything, but he knows he is sick and he knows he’s in the hospital. And although his speech is now impaired, along with his ability to swallow, eat, drink, and breath, he is still looking at me and wanting me not to be sad.